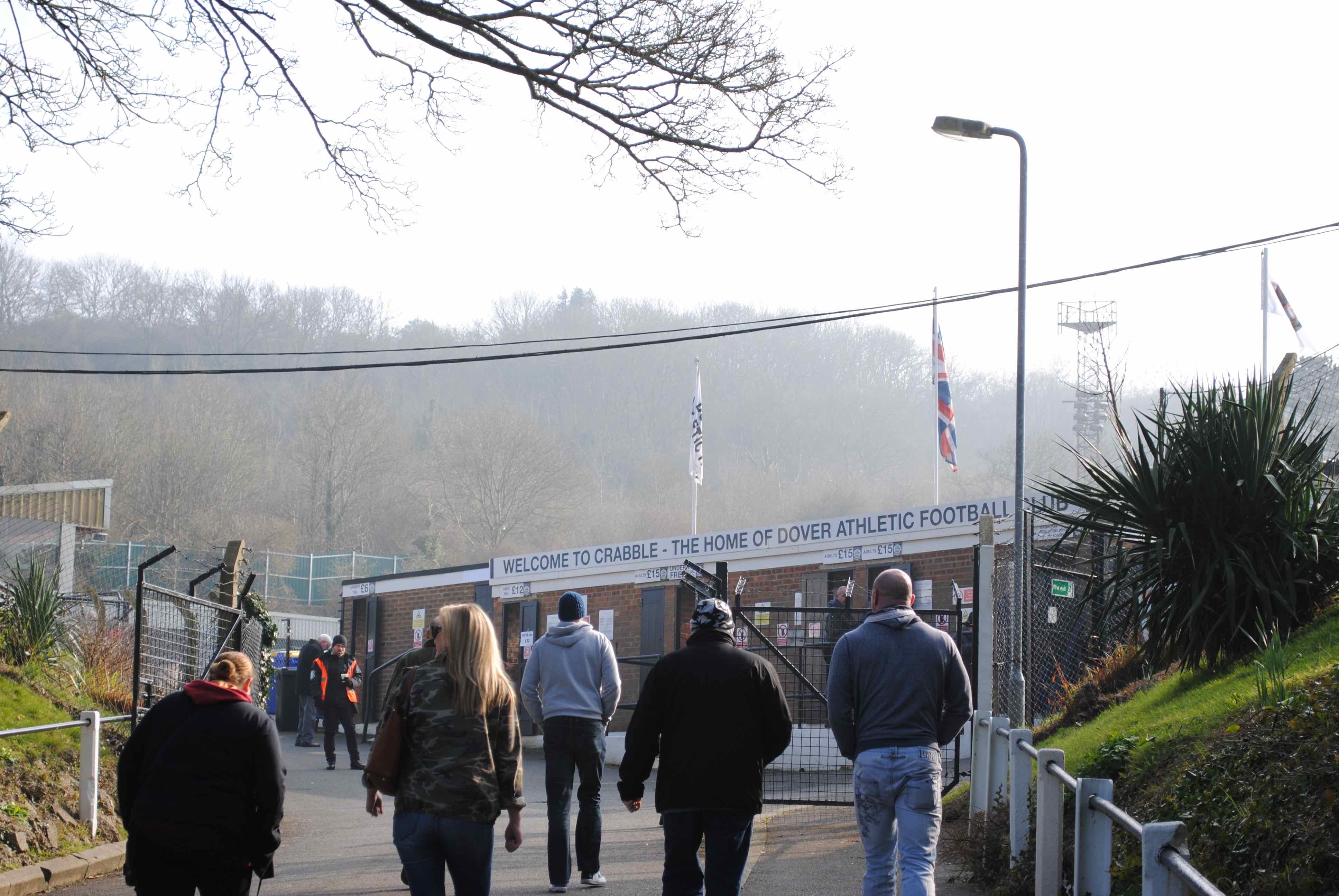 The Dour runs through it and Dover is a dour kind of place, a seaside town that makes few concessions to the popular traditions of the English seaside. It’s a practical, workaday place, leaving Kentish amusements to the likes of Margate and Broadstairs. To Dover then, where Dover Athletic were playing Tranmere Rovers in the Vanarama National League, at the fifth tier of English football. The walk from the town centre to the Crabble Athletic Ground starts by the Dour, then takes the visitor along the A256, and past the edgeland of Crabble Meadows, past the severe beauty of St Andrew’s Church. Then the ascent steepens and it becomes clear that the match is to be played at (modest) altitude. In fact the ground has (for an English football ground) an unusually impressive setting, with a view across Dover on one side and a tree-adorned hillside on the other.

Dover Athletic FC was founded in 1983, shortly after Dover FC folded in the same year as a result of its unmanageable debts. It is the latest embodiment of the town’s football club, a lineage that goes back to 1894, with a history that follows the common cycle of foundation, debt, dissolution and re-foundation. Through that long history the club has never made it to the Football League in any of its incarnations. By contrast the visitors, Tranmere Rovers, have climbed high and fallen hard, having once mixed it in what is now the Championship.

The most vocal of the home support was gathered on the terraces behind the opposition goal before the start of the game (and changed ends en masse at half-time, leaving that stand almost empty for the second half). The banter was directed mainly at Tranmere’s goalkeeper, Scott Davies, and centre-back, Steve McNulty.  When a solitary toilet roll sailed in the direction of Davies before kick-off, the gesture seemed as stylised and anachronistic as swordplay in a Sealed Knot reenactment. McNulty, a target because he was clearly the heaviest player on the pitch, actually gave a canny performance, demonstrating that intelligence and anticipation are as important as speed in that position.

In fact most of the fun for the Dover supporters lay in goading the opposition. At one point a ball went out of play and the Tranmere goalie waited for the ball boy to collect. The boy stood up briefly and then sat down again at the prompting of the home fans. Exasperated by this gamesmanship Davies glared at him and gestured in the direction of the ball. The boy stood up again, obviously torn between diligence and tribalism. The home fans howled even louder and he sat down again. Davies had to trudge over and get the ball himself, to the delight of the Dover fans. As unscripted theatre it was superb.

That was about as entertaining as the game got, apart from an egotistic and sustained display of petulance by Dover’s Ricky Modeste in the second half, from which he was lucky to emerge with just the single yellow card. Modeste was upset about a challenge from a Tranmere player, retaliated, and then berated the referee. The fas were supportive to the point of indulgence: ‘Leave it, Ricky.’ ‘It’s not worth it, Ricky.’ ‘Don’t let him wind you up, Ricky.’  Grow up, Ricky, I thought, but didn’t say.

In truth, the match was a dull affair, with Dover having the better of it in terms of possession and scoring chances. The outstanding player was probably Dover’s Sam Magri, though that was due to occasional flashes of skill rather than sustained brilliance. But both teams were better in defence than attack, and what few chances they created were not taken. The preponderance of aerial balls and stray passing made it hard for either team to establish a rhythm. A drab game near the Dour then, goalless in Dover, and yet the fans remained involved, committed, passionate; a reminder that more so in football than in any other sport or entertainment, the sense of occasion created by the fans can compensate for the lack of spectacle. Non-league football, patronised and abused, is a serious affair. If the Premier League is grand opera then the National League, indeed all non-league football, is mystery play: demotic, local, egalitarian.